Just not on the MS blog. I am continuing to blog on my MidWestHorse Blog. I'm not abandoning this completely, but I am concentrating my time on my other blog. After all it was the first, my baby.......I thank everyone for their support and hope all are doing and feeling well out there.
Posted by Callie at 3:25 PM 2 comments: 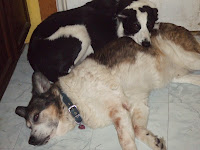 I'll start by apologizing to all of you who are quite supportive to me and have been since I met you all. But I'm going to take a break from this blog for awhile. My husband at times has encouraged me to go out and visit the other MS blogs and I have tried, but recently I've had much more difficulty visiting as most have you have been dealing with MS much longer than I have. And when I read some posts from strong people struggling with this disease, I can only see my future which starts to get me scared and I cannot bring myself to do it for now. I think mentally I prefer to continue blissfully thinking that this will not get any worse and I need to keep a positive attitude. And just work my job and take care of my family and critters. Things I used to just put off as a bad bed, being tired from night shift and whatever now I've become too hyper-aware of being related to MS, which is really freaking me out right now. I need to focus on the here and now and not worry about what my physical and mental future may be. So again, I apologize and when I'm ready, I'll be back. Until then, all take care and heal well...........
Posted by Callie at 7:05 AM 10 comments:

This is my Neurologist, Dr.Prince..........He is also a horseman........Yipee! Stephen and I went to see him this morning for one of my follow-up appointments. I think he thinks we are both nuts.........Had him laughing today as well, probably because we yak as a couple and it more than likely takes every bit of concentration on his behalf to understand us as I crack jokes about my recent cognitive fauxpas at work and how I blame it on holey brain and my darling Stephen discussing treatments in England for migraine relief. Poor guy, I printed out my list of current damages and asked him to pop in chart and I think he was impressed that I had blog, of course, I said there's an unfortunate wealth of experience out there. Not that the info is unfortunate, but that there are so many of us out there who have this. My liver, still ok. One enzyme up a squeegee, but nothing to be concerned about. And will get labs again in July. Fingers crossed that liver holds up. Found out that one of the Neurosurgery Residents that I used to wake at 3am for such and such patient was now in his office. Told him to say Hi from crazy Callie, PICU night nurse, that used to give him a hard time. Neurosurgs always hate to rotate through Pediatric ICU's ........Hate us, actually. Afraid of kids, I think. Gave me a script for a new antispasmodic to give a try. Good! Can't wait to give it a try. I told him good days and bad. He asked about my riding, I said balance and damned foot, but not givin' it up. Even if I fall off. Thank God for forgiving and understanding mares. Told him the cognitive freaks me the most and I'm used to tipping over. And I asked just exactly which variation of this MS I have, which is what I guessed , Relapsing Remitting. Isn't that how it usually starts. Then Steve and I went to Denny's for breakfast and just giggled about the visit. I'm sure we are different as I bring my Hubs with who is eccentric as it stands and what doesn't work in my brain, works in his and vise verse. And we discussed it. The thing is it is what it is and there's no point in griping about the damage already done or the future. I figure it's best to keep fingers crossed that current treatment continues to work without killing my liver and I go forth and learn to live with it. He's a good Doc and I like him. He actually remembered me and Steve. How possibly could anyone forget! We tend to leave them laughing.
Posted by Callie at 8:46 AM 9 comments:

Zeke and His Mouse 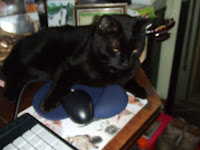 Today, much better after good nights sleep. May even go out in snow and shovel horse poop.....This is Zeke, who feels the need to help Mommy blog.......Maybe, I'll create more business cards to pass out at upcoming Horse Expos, I'll going too. Thanks all for the concern of yesterday's feel sorry post.......LOL, I'm over it. Hope all is doing well. Will try and scoot around and visit everyone today.
Posted by Callie at 8:28 AM 2 comments:

Another Sucky Sunday with An Avonex Hangover 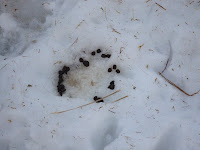 Goat Turds!!!!! That's what I feel like........My gosh I shivered like a dog poopin' razor blades today after that Avonex..........And speaking of goats and dogs, the darned little bugger goats broke loose again today and Steve had the pleasure of rangling them. Will try and catch culprits in the act on video for all of you to enjoy. Devilish little critters, they are........Still took the time to go out and enjoy warmer breezy air and outdoor critters this afternoon, but short lived and will gratefully crawl into warm bed with valuim tonight.
Posted by Callie at 7:46 PM 5 comments:

I do not know what the hell has gotten into me today, but I actually feel like a normal human being again. Hope it lasts. I got up early, wrote my list of shit to do and went on my merry way, Steve helped me unload garbage out of truck at the end of the driveway, I shoveled out back of truck, not completely, but enough, drove it to the station, gassed up and headed towards clinic to pay a bill and finally get my labs drawn before Tuesdays appointment with Neuro. I stopped at good ole' Walmart for some things I needed and then headed back to the feed store for 250 pound of grain for horses and goats.. Steve unloaded it from the truck, but then I ripped the 50 pound bags open and emptied them into the feed bins, we both corralled the goats back into their pen after Steve shoveled them out and now I'm fixin' to clean the water troughs outside, which requires retrieving the hose and unwinding it, just right so that there are no kinks and I think today, I'll quick bleach troughs before putting fresh in. That means finding a creative way to empty what is left in it, so the horses don't have to ice skate. Not an easy task as this a 100 gallon tank that is probably just under half full. Last time, I manged to freeze my feet off. I feel good today and I don't know why! Cripes! MS is weird! Oh and fold a basket of laundry.............
Posted by Callie at 9:55 AM 4 comments:

I Thought I Would Entertain You All

I thought I might bring a little chuckle to my fellows MSers, who seem to as well as me be getting our butts kicked by this crappy disease lately by posting a video of my crazy yet entertaining goats I took yesterday. This should bring a smile to your faces, if you find your way here that is. Great entertainment....... At least I find it funny. These are the boys, Herman, the larger one running around and jumping onto his house. Pumba and IttyBitty head butting. Just cracks me up, but I am easily entertained. Probably due to lack of some brain cells.

Latest Blog Posts From Around The MS World